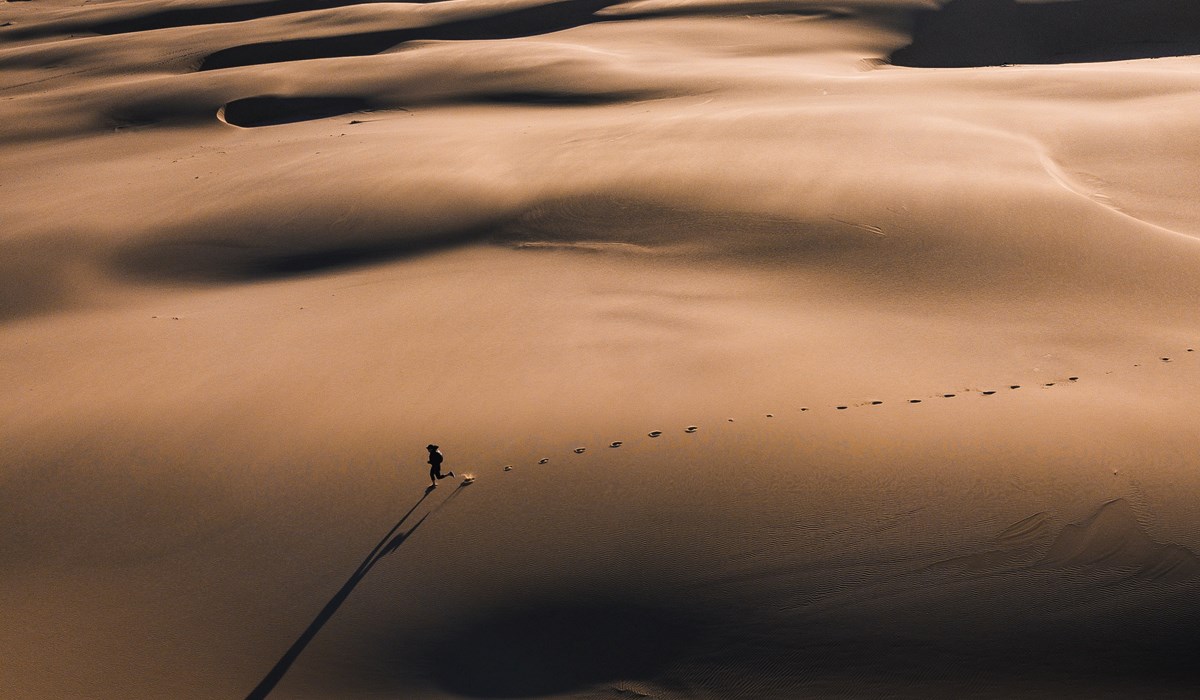 Our first day in the desert was spent completing medical and technical checks. The MdS is self-sufficient with runners carrying everything excluding water and tent; there are strict rules regarding race fitness and equipment.

Bags must start between 6.5kg and 15kg including all compulsory kit, food and ‘luxuries’ such as toothbrush or sleep mat. Mine weighed 8.7kg, slightly heavier than I hoped but not unexpected as I was carrying almost 50% more food than the minimum 2000kcal/day. This was a calculated risk balancing extra weight against the benefits of being better fuelled. That evening was spent admiring the vast African night sky, I saw a shooting star.

Anticipation was high as many runners had been postponed several times through the pandemic, some were returning hoping to finally complete the race following the difficult 35th edition in October 2021. After the daily start line briefing from race director Patrick Bauer, including birthday announcements and the traditional ‘Highway To Hell’ soundtrack, we were off. I paced myself carefully knowing that there was a hard week ahead and the Sahara is considerably hotter than my training ground of the Alps in winter! Several hours spent in saunas appeared to pay off as the heat was manageable and I completed day 1 feeling strong. A highlight was talking to ‘Spider-Man’ who completed the entire race in full costume for charity.

Day 2 was both longer and more challenging as it included sand dunes plus a lengthy straight section across stony ground where a prolonged sandstorm made the going extremely tough. After a brief stint following a compass bearing as I couldn’t see more than a few metres ahead, the storm eventually cleared and I approached the final jebel climb. This was where my mountain legs kicked in and I pushed up the rocky gorge with good pace. A super-fun sandy descent and short run into bivouac was followed by a visit to the Doc Trotters medical tent for some blister care advice.

This was one of my strongest days as we were routed over three more jebels, the middle of which had a steep rope-assisted sandy ascent which sapped energy from tired legs in the midday heat. My alpine training came to the fore and I whizzed past lots of other runners, enjoying the summit views and breeze. Once back at bivouac I and my 7 tent mates focussed on preparing for the long stage: hydrating, ‘washing’ (sort of!), and getting calories in with a protein shake, salty snacks, and rehydrated food.

My other strength is my ability to speed-walk for very long distances. This was exactly what was required on the long stage which included a dried-out lake crossing, various river beds, wide stony plains, sand dunes, and three smaller jebels each boasting spectacular views. The weather was overcast and slightly cooler, we even had a few spots of rain! This made the going much easier, as did linking up with a fellow runner from 55km so we could encourage each other to keep pushing the pace into the night. We finished just before midnight, managing a ‘sprint’ across the line. This was a real achievement as it meant we had 24+ hours completely free to rest. Apart from the necessary admin the following day I only left my tent to cheer the final runner (barefoot!) over the line at 5pm, and to attend the random string quartet / opera singer evening performance put on in the middle of the bivouac.

By now my feet were in a bad way with multiple blisters and several loose nails. They were extremely painful and although my legs were ok it was only with painkillers on board that I could even contemplate another marathon. The day was hot which also restricted my pace, but I gave it my best shot, maintaining my speed-walk throughout. Unfortunately other runners seemed to find another gear and I dropped several places down the rankings. My final position was 295 overall, 33rd female and 17th in my age category which I’m pleased with. We crossed the line to receive a medal and hug from Patrick before heading back to our tents.

This is known as the charity stage and although it’s not timed it is compulsory. Friends and family of competitors had travelled to join in and everyone walked together through spectacular sand dunes to the finish. There was scalding hot sweet mint tea as at the end of every stage and buses to take us to our hotels. The UK contingent stay in the lovely Berbère Palace which provided magnificent buffets, plenty of beer, and a somewhat chilly pool for some much needed R&R before flying home.

The UK team for MdS is coordinated by MoreThanRunning which makes the whole experience hassle-free. Safety is a priority for the MdS organisation with plenty of water available and race staff on hand to help with whatever is needed. Supporters can send daily emails from home to runners which are printed and delivered to tents each evening, a welcome source of morale especially any jokes which were shared around. By far the highlight for me was the lovely people I met, ran with, cheered on and was cheered on by. The camaraderie was fantastic and truly life-affirming.

I am proud to say that I’ve raised over £3000 for the Stroke Association: thank you so much to everyone who has generously donated. It’s not too late if you have a few pennies to spare, please visit www.justgiving.com/DrLucySykes

If you’d like to find out more about Lucy’s experience and her work as a Stroke Physician and with Pogo Digital Healthcare, then sign up today for our second Digital Health Talk, A new approach to effective communication post stroke. April 26th, 12 noon – 12.40.